Rioting in The Villages

The rioting in major cities across  the U.S. has spread to The Villages, Florida, a retirement community of 100,000. 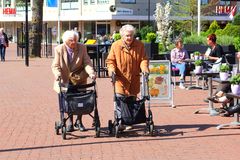 The thugs were easily caught and arrested since they were using their walkers and golf carts to flee.  The protests have been limited to the evening hours because most of the lawbreakers either had doctor’s appointments during the day or rioting would have interfered with their naps. The marches didn’t last that long because many of the demonstrators had to get home to pee.

In many cases, the demonstrators simply forgot why they were even there.  Officials considered a curfew starting at 9 p.m. but since that’s the time when most of the residents go to bed anyway, it was decided that it wasn’t needed.  Community leaders concluded that part of the problem was that residents were restless because they had too much time on their hands since the recreation centers, pools, theaters, boutique stores and especially the bars were closed due to the coronavirus.

Community officials wanted to form a committee to look further into the problem, but the next day no one could remember why they needed a committee.
By Rev. Paul at July 10, 2020

once a rebel, always a rebel